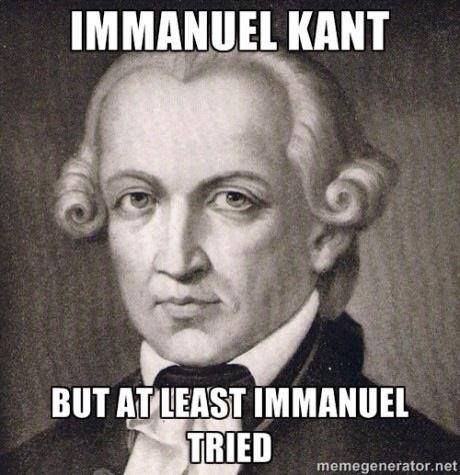 As part of the Moral Philosophy unit you are required to know about Utilitarianism and one other moral theory. We have been learning about Kantian Ethics. You need to be able to explain the main features of it, three criticisms and be able to apply it to different moral situations.

What are the Main Features of Kantian Ethics?

Kantian Ethics is the name given to the moral theory discussed by German Philosopher Immanuel Kant. Kant argued that many things we think of as being ‘good’ could actually be used for evil. such as Knowledge and Money. Therefore as human beings we should approach moral dilemmas by working out what we believe our duties are and follow them.

“A man is acting morally only when he suppresses feeling and inclinations and does what he is obliged to do. e.g. Doing Ones Duty.”

Kant believed that we should completing actions because it was our duty to do so rather than looking at the consequences of an action to decide whether it had the best outcome. This type of ethics is called deontological.

Deontological (duty-based) ethics are concerned with what people do, not with the consequences of their actions. Essentially you need to –

Some examples of these duties may be

Kant taught that every rational human being could work this out for themselves and so did not need to depend on God or their community or anything else to discover what was right and what was wrong. Nor did they need to look at the consequences of an act, or who was doing the action.

Kant believed that in order to determine a code of moral conduct, an action must be true in every situation. A moral action or a maxim was therefore tested against the rules of the Categorical Imperative. This comes in two parts.

Always act in such a way that you can also will that the maxim of your action should become a universal law.

Essentially when deciding on your duties, you have to ask yourself the question. Will this be the right decision in every circumstance? This means that if you are not willing for the rule you are creating to be applied to everyone in every circumstance then it cannot become a duty.

An example of this would be if you had a someone told you that you promised not to tell anybody. If you were deciding whether to break the promise you would question, would I be happy to have a promise someone had made me broken. You would probably say not, therefore the moral action is to not break the promise because that rule could not be applied universally.

Also if we universalised the rule “break all promises” – then there would be no such thing as a promise because they are all being broken. A maxim therefore cannot contradict it’s self.

Means to an End

Act so that you treat humanity, both in your own person and in that of another, always as an end and never merely as a means.

The second Categorical Imperative is that you should respect all human beings and should treat people as equals to you. This means you should not use someone as a method of personal gain, they should not be manipulated, bullied or be forced into something.

An example of this would be you were helping so that they would then be due you a favour back.

What are 3 Main Criticisms of Kantian Ethics?

You will need to know 3 Main Criticisms of Kantian Ethics as well. These are 3 common ones to use.

It is possible to fidn ourselves in a situation where mroe than one duty applies at the same time.

For example, if your best friend confides in you that they are feeling really down and have considered self harming but makes you promise not to say anything. You have a duty to keep your promise but you also have a duty to care for your friend.

Kant does not provide a solution for such a problem.

The Enquiring Murderer is a common critcism of Kantian Ethics. This is a hypothetical scenario whereby imagine you see someone running desperately from an axe murderer and runs to hide. The murderer then ask you where the person went. You have a duty not to lie but if you don’t lie you will have facilitated someone’s murder.

This is a direct challenge on Kant’s decision not to take into account any consequences of an action.

Kant argues that “all is good in the Good Will” – meaning as long as your intentions are good then your actions are deemed acceptable. Providing they are in line with the categorical imperative.

You have studied another moral theory as well as Utilitarianism. Explain the main features of this theory. 6 marks

You have studied another moral theory as well as Utilitarianism. Explain three criticisms of this theory. 6 marks