The Noble Eightfold Path consists of eight ways of thinking, speaking and behaving that the Buddha said people should follow if they want to reach Nirvana, the end of suffering.

Some would argue that it may be too difficult to follow. See below at each of the steps and challenges it may present. 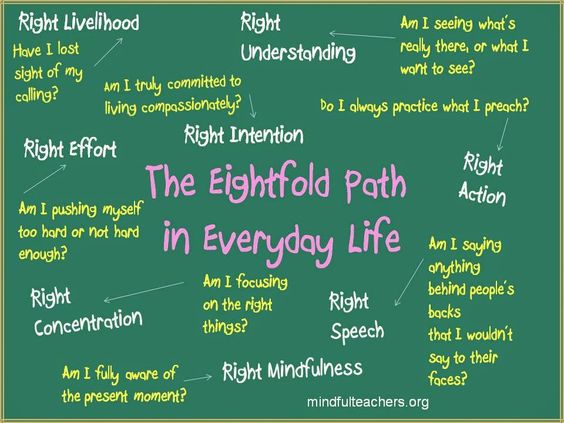 Right Understanding understands the teachings on karma and rebirth, the Three Universal Truths, the Four Noble Truths and the Noble Eightfold Path. However, this is not just an intellectual understanding. Rather it is where you actually feel those things to be true in your heart and they influence the way you see and do things at a day-to-day level. This could prove difficult for some.

Before we do anything we usually think about it; first we develop the INTENTION to do something then we do it. Sometimes our intention is a selfish one, where we decide to do things just for the sake of our own happiness. Sometimes we even do things with the negative intention of harming others.

Right Speech means (1) not lying, (2) not swearing, (3) not gossiping and (4) not saying things that cause other people to fall out. A Buddhist always tries to do the opposite of these things: he or she tries to tell the truth, to speak pleasantly and about meaningful subjects. Finally, he tries to speak in ways that cause harmony between people. This may be hard to follow through for many at all times.

Right Action means (1) not killing or injuring any living being, (2) not stealing, and (3) not committing sexual misconduct (simply put, this means not being unfaithful to your partner).

A Buddhist must never make their living in a way that is harmful to others. This means that he or she can never work selling (1) weapons, (2) meat, (3) slaves,
(4) harmful drugs or (5) poisons. A Buddhist could be a chemist because the drugs he sold would not harm people. He could not own a pub though!

Some Buddhist’s may have difficulty working in the cigarette or alcohol industry or in the manufacturing of weapons. Also jobs that exploit animals or damage the environment should be avoided.

To be mindful of something means to remember it. We all have mindfulness but it is usually mindfulness of something meaningless like the pop song we can’t stop singing or the girl or boy we can’t stop thinking about. Buddhists learn to be mindful of a calm and peaceful state of mind so that when something that causes a strong sense of ‘self’ suddenly appears to the mind, be it a thought, a feeling, a sensation, or an object, they remember or are ‘mindful’ of that calm and peaceful state of mind.

What are the benefits and difficulties when following the Eightfold Path?

The benefits of following the Eightfold Path are:

Some difficulties of trying to follow the Eightfold path are

2 thoughts on “The Noble Eightfold Path”