LearningRMPS.com is a completely free to use site. And is used by thousands of people each month. It was originally set up to help my own students without the need for a password or log in. It has grown and as such the domain itself costs over £100 a year to keep the site running. This comes from my own money. I have no sponsorship or income from ads. If you feel you benefit from the site please donate what you think it is worth to you.

Living a life in accordance with the Noble Eightfold Path is itself a form of worship. There is no God in Buddhism and Buddhists do not worship Buddha himself as a divine being. The Buddhist community is called the Sangha. The Sangha can refer to a monastic community (Monks living together) or to the wider Buddhist Community.

The Five Precepts are guidelines for ethical and moral behaviour so that the Sangha (community) can work well together. They are not strict but are instead suggestions for suitable behaviour. Buddhists should follow these as they help reduce suffering and harm to themselves and others. They outline behaviours to avoid or abstain from. 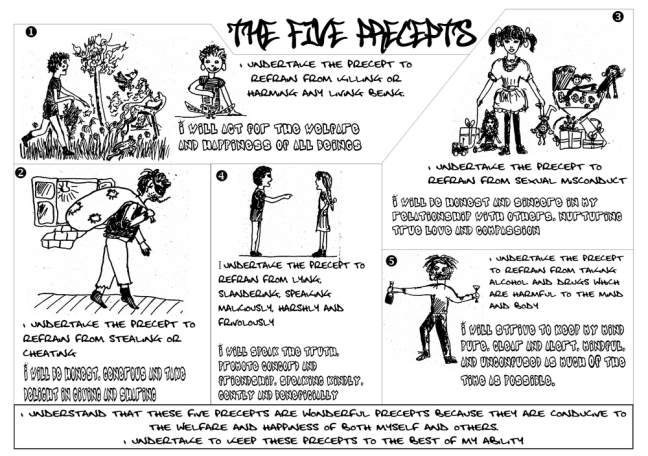 The Five Precepts help a Buddhists on the path to enlightenment as they avoid behaviours that cause suffering to others and to themselves. It helps them develop good kamma and overcome the Three Poisons which will bring them closer to escaping from Samsara.

The Five Precepts in the Monastic Community 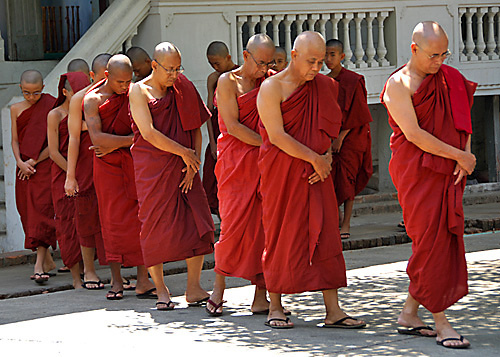 The Patimokha (the Tibetan monastix discipline code) has four codes of conduct called the parajikas.

If a bhikkhu (monk) intends to break any of them they may not become a monk again. You may be able to draw similarities between this code of conduct and the first four precepts.

We will be studying each of the 5 precepts in more detail each week and we will add a post up about each precept as we cover them.

The Three Jewels are 3 common features of all branches of Buddhism. The three Jewels are The Buddha, The Dharma and The Sangha. They each have their own colour and significance. 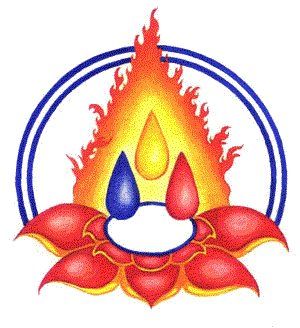 The Dharma  is the practice of Buddhism, the moral code as set out in the Dharma (teachings). It is represented by a blue jewel that symbolises the vast ocean like freedom of the Dharma. Such things as the Noble Eightfold Path reveal how a buddhist shoudl live their life so they are succesful on the path to enlightenment and overcome the Three Root Poisons. The Five Precepts are guides for ethical conduct.

The Sangha is the thrid jewel, represented by the red jewel. Sangha is the community of Buddhists from all over the world. Sangha includes everyone who has made a pledge to follow the teachings of the Buddha by trying to act in an ethical way that reduces suffering and combats the Three Root Poisons. The Sangha can also refer to the Monastic community. 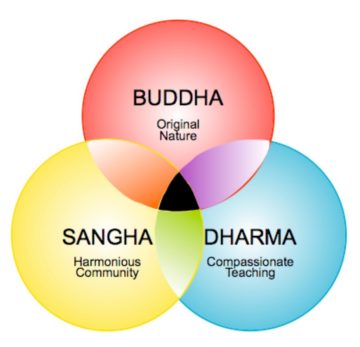 The Three Jewels and the 5 Precepts

2 thoughts on “Introduction to the Five Precepts and Three Jewels”