The National 5 Exam is made up of three parts.

It lasts 2 hours and 20 minutes, so roughly 45 minutes per section. Within each section there are different topics, you need to make sure you answer only the topic you have studied.

One Religion
One Moral Issue
One Philosophical Question

The question paper has 80 marks out of a total of 100 marks.

The other marks are awarded for the demonstration of skills.

The question paper has three sections and each section has a number of parts. Each part has a minimum of 25 marks available. There are 4–6 questions in each part, worth between 3–8 marks per question.

Here is a really simple list of the main topics and what you should definitely know. This is the bare minimum and you would be expected to know a lot of detail and be able to draw links between the different parts.

Responses should be drawn from religious and non-religious perspectives.In each part, candidates should be able to do the following at a straightforward level:

Part A: Morality and Justice

Part B: Morality and Relationships

Part B: The Existence of God

Part C: The Problem of Suffering and Evil

This is all available on the SQA website as well as practice Exam Papers to help with your revision. Use the tags in the side bar to find other help guides.

There are three main skills you will need in your exam. Use the handy guide in Appendix 2 on the SQA website to help you with the skills and how to best use them. https://www.sqa.org.uk/files_ccc/RMPSCourseSpecN5.pdf

These are probably the most straight forward question types. They are basic describe questions you will be asked to tell the examiner what you know about the particular belief, practice or topic. Look at the points this question is worth to give yourself an idea of how much detail to put in.

There will be an 8 marker question in each section, this will be an Evaluation question.

For some time now, ‘evaluating’ has been misunderstood as simply listing two sides of an argument. The skill demands much more than this and expects candidates to discuss the quality of any positions taken. This involves: 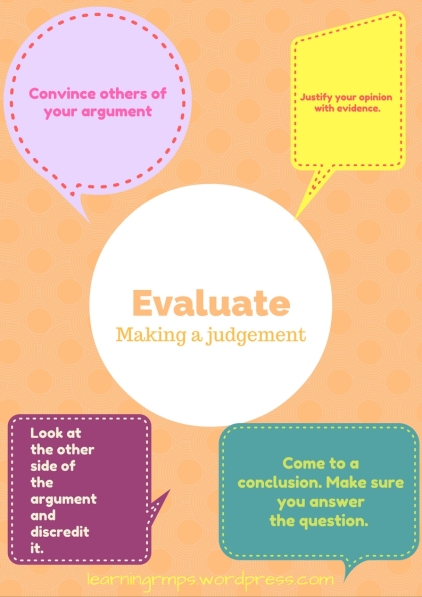 Read more about How to answer 8 Marker Questions here.
I would highly advise all candidates to look through the Course specification on the SQA website. It explains in detail all about what is expected in the exam and how best to answer the questions. https://www.sqa.org.uk/files_ccc/RMPSCourseSpecN5.pdf