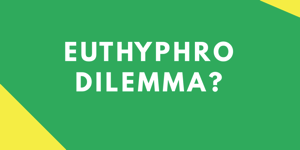 What is the Euthyphro Dilemma?

Euthyphro is a famous moral question posed by Plato, a famous philosopher. He recorded the following dilemma that came from a debate between Socrates and Euthyphro.

Euthyphro was a lawyer who brought his father to court for killing a slave. Euthyphro was adamant that his fathers action was wrong and his father should be punished accordingly. He believed his father’s action was impious and unholy.
Socrates was a famous philosopher, who is dubbed as the ‘father of philosophy’. Socrates was at the court to see this trial of Euthyphro’s father and he himself was facing the Death Penalty for ‘corrupting the youth’ — for encouraging them to think for themselves and not just do what they were told.

Socrates wanted Euthyphro to define the term impious.
Euthyphro defined piety as “what is pleasing to God” therefore impiety is an action that is displeasing to God.

Put simply – Is something good because God commands it to be good or does God command it because it is good?

If something is right because God commands it to be right does this mean that God is making up the rules for everyone to obey? Does this make something right just because God says so?

If God says something is good because it is already good, then who has already decided it was good? Is there a higher order than God who makes this choice?

The Problem with the Gods.

Socrates is facing the Death Penalty for encouraging his students to think for themselves. Socrates asks Euthyphro who will judge that he has done something wrong. Euthphyro states that God will be the judge – they decide what is pious and what is not.
Socrates asks how the Gods make their decisions – is there a moral law out there somewhere which they use to judge goodness or does it come from within them.
The problem with this is that the Greek Gods often did awful things like rape and murder so if morality came from them then it would be okay to rape and murder but if they used a moral law then they would not be all powerful and therefore should not be seen as the ultimate source of moral philosophy.

Where does Morality Come From? 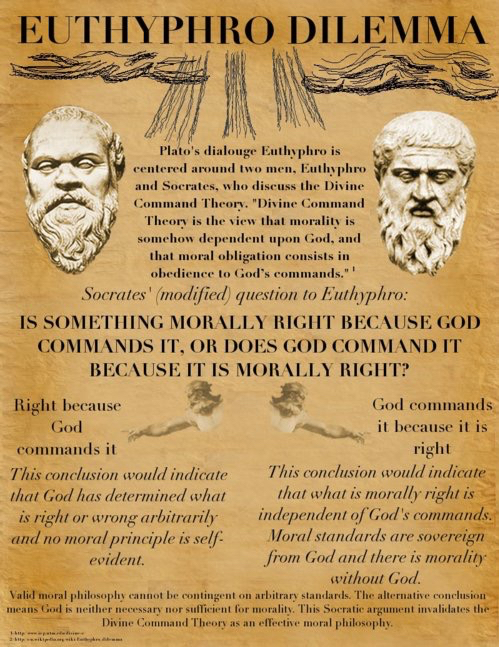 This is religious thought. The original Dilemma was adapted for Christianity changing the wording from many gods (polytheism) to one God (monotheism).
We are going to look at the argument from a monotheistic christian perspective.

Is something good because God Commands it?

This position assumes that a moral act is good if God wills it. By following God’s will, humans act morally.

Does God command it because it is good?

This position assumes a link between God and Morality but argues that moral values are not established by God’s will. Rather He operates according to moral laws already existing in the universe.

Why is this a dilemma?

For atheists this is not a problem; atheists accept that morality exists and is unexplained but does not require an explanation.
It does present a dilemma for those who do believe in God. God is either bound by Moral laws (and is not omnipotent) or is inconsistent in his commands of morality (and therefore is not omnibenevolent)

One thought on “The Euthyphro Dilemma”