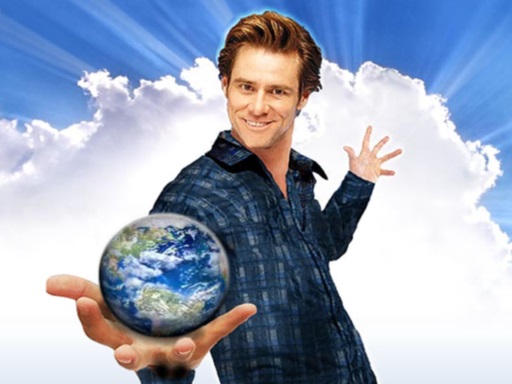 Our S2 class have been learning about Suffering and why it happens and recently after watching Bruce Almighty have been challenged with the task of writing an Imaginative Piece on “If I Were A God”. I have put up some of my favourite pieces so far!

I have been thinking about what is going on in the World and decided I would give you my thoughts on what I would do if I was you.

Firstly I really think you should start with America. The situation with guns in that country is ruining so many lives. If I were you I would start by making sure those in power made guns illegal for the general public.

Your next problem is hunger. There are far too many people who do not have enough food and water. You could start by making it rain in places that have no water. This would allow them to drink and grow crops.

Now the last problem I want to bring out is Global Warming. I was hoping for you to help out everywhere that suffers from Global Warming by; helping the human race reduce carbon emissions, by stopping people cutting down trees and by encouraging people to end the extinction of animals.

I was thinking, since I have helped you with these ideas of how we can end some suffering and make the world better, maybe I could ask for something that could help me too. If you could see that when my mum buys her lottery ticket next week it’s got the winning numbers on it that would be amazing. There are so many people in my family I would like to help.

If I was God I would ban guns in all countires except from military and police. The crisis in America with guns is getting ridiculous, many deaths are gun and gang related.

Pollution is getting bad as well but with more electric cars getting built that should cut it down. With massive factories getting built more often, pollution will get worse.

But will this ever happen? Probably not.

I’m God! I can’t believe it! I really want to use this power to help people less fortunate than myself. I think I will surprise all the children living in poverty in Scotland by making their Christmas special! I am going to look into their minds and see what they each want the most! Then, I am going to wrap the presents up (with my mind) and teleport them to each of the kids houses. Helping people makes me happy and a happy God means a Happy World….

and stopping wars wouldn’t be missed.

Poverty would be beyond existence,

Once I’d gave my assistance.

For those who were seriously ill,

I would invent a magic pill.

Challenges in life will still remain,

However they won’t be quite as insane.

Of all civilians that are found in danger,

I will help despite being a stranger.

as long as the shared it evenly among each other.

And once I had completed all these tasks,

I would have a break unless that was too much to ask.

If I had God’s powers for day I would wake up, make my teeth straighter and take off my braces then I would cure my diabetes and Asthma. I would then have my breakfast and I wouldn’t need to brush my teeth because I can just use my powers. I would go outside and clear all the clouds. I would give all the starving people in the world grown crops. Then I would get all the prayers and I would hire someone to read them and answer them. I would make it rain in the dry countries but not too much. I would have my lunch and dinner then give money to the homeless so they could buy a house.

This is just a few of the response we have had. An excellent response S2! Well Done!