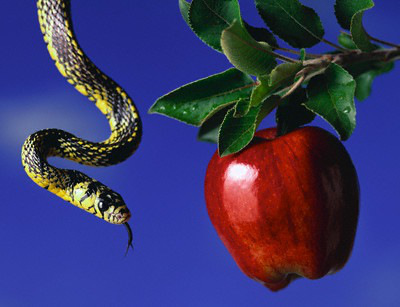 You will have to work hard and sweat to make the soil produce anything, until you go back to the soil from which you were formed. You were made from soil, and you will become soil again.

The story behind original sin is told in the Old Testament book of Genesis:

God originally made a perfect world. He created Adam and put him to live in the Garden of Eden – a blissful place where he had nothing to do but take care of the garden.

God told Adam that he could do anything he wanted, except eat the fruit of the tree of the knowledge of good and evil.

Later, God created Eve to be Adam’s wife. Eve was tricked by the serpent into eating the fruit of the tree of the knowledge of life and death. She gave some of the fruit to Adam and he ate it too.

God banished them from the Garden of Eden into the harsh world outside.

God also banned them from eating the fruit of the tree of life, and so death entered the world.

What is Original Sin?

Original Sin, refers to above passage in Genesis in the Bible, where Adam and Eve were banished from the Garden of Eden for disobeying God’s commands. This can also be known as The Fall. Many believe this is a literal story and this is how sin was brought into the world. Others believe it is a story or analogy used to explain why there is evil in the world, because humans have gone against God’s word.

Augustine, a theologian believed that because of this all humans are born sinful. We all have the capability and capacity to sin.

What does this mean for humans?

Augustine developed the idea of what has come to be known as ‘original sin’. Due to Adam and Eves actions in the Garden of Eden, the whole of humanity carries the same stain of sin and suffers and dies. Humanity needs God to save them from the suffering.

Christians believe that God gave them freewill and his word through teachings in the Bible, Jesus and preachers show Christians how God would like them to live their lives but it is up to each individual to make that choice.

An explanation for the evils of the world

Some Christians believe that original sin explains why there is so much wrong in a world created by a perfect God, and why people need to have their souls ‘saved’ by God.

A condition you’re in, not something you do

Original sin is a condition, not something that people do: It’s the normal spiritual and psychological condition of human beings, not their bad thoughts and actions. Even a newborn baby who hasn’t done anything at all is damaged by original sin.

Original sin affects individuals by separating them from God, and bringing dissatisfaction and guilt into their lives.

On a world scale, original sin explains such things as genocide, war, cruelty, exploitation and abuse, and the “presence and universality of sin in human history”.

The Fall and the Origin of Evil

The doctrine absolves God of responsibility for the evils that make our world imperfect by teaching that Adam and Eve introduced evil to a perfect world when they disobeyed him.

An alternative understanding of the story of the fall emphasises that Adam and Eve did wrong because they ‘gave in’ to the temptation of the serpent in the Garden of Eden.

These two versions offer radically different ideas about the origin of evil:

This second understanding fits well with human psychology. Looking at it this way, original sin becomes the tendency for human beings to ‘give in’ when tempted by the prevailing evils of the society around them, rather than standing up for good, and it helps explain why each individual finds temptation so hard to resist.

A third understanding teaches not so much that Adam’s sin brought sin into the world, but that it removed from humanity the gift that enabled people to be perfectly obedient to God.

Getting rid of original sin

The only way a person can ‘cleanse’ their soul from sin is to:

Many churches accept that infants can be cleansed of original sin by being baptised soon after birth. The other elements required are carried out by adults on the baby’s behalf during the ceremony.